DNSSEC Your Domain or Else...

November 23, 2015
So last weekend I competed in TNW's Hack Battle in NYC which is very very rare for me since I usually serve as mentor/sponsor or judge at most of the hackathons that I attend.  I actually enjoy competing in hackathons & this time was no different. I enjoy being able to meet people with similar interests & sharing our creative ideas with the goal of just building shit to at the very least, flesh out these ideas. 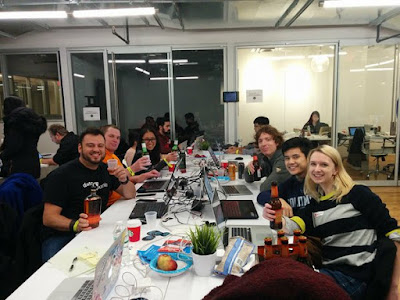 My colleague affectionately A.K.A Martin "The Pullova" & I formed a team with no actual idea when we arrived but we quickly connected with some ppl that were sitting across from us at our table.  We pitched ideas back & forth before the sponsor talks/demos but after all of that I was inspired & an idea formed.  The Verisign sponsors pitched their Get DNS API project which basically has functionality to validate if domains are DNSSEC enabled.  For those of you who are asking WTF is DNSSEC bone up on it here


My idea basically consisted of a public shaming tool to build awareness around non-DNSSEC domains & engage the domain owners in securing their DNS in order to address privacy issues that are a result of non-secure DNS.  I believe in building awareness but also 100% believe in giving opportunities to resolve issues when discovered.  So the hack would shame ppl on social media but would also create a vehicle for the shamed to publicly make things right in full transparency. We would also provide some corrective recommendations for the offending domain based on the DNSViz tool also provided by Verisign.

We quickly found that the Get DNS API project already had a public shaming hack posted but all it did was shame the domains with no offer of redemption or recommendations on how to secure their DNS.  So we formed a team of 5 with some ppl that were sitting across the table.

Martin & I are primary living in devops roles these days our new teammates consisted of a very green developer, a business student & a pure graphical designer.   So the idea evolved into this hack:
We started working on the project & collaborated through the night building servers (on Linode props!!!), logo's, api's, landing pages, twitter accounts etc....  Everyone was passionately contributing & crushing the tasks at hand & the collective synergy was very truly inspiring.

At the end of it all we had most of the pieces for the hack prepared & functional but in true hackathon fashion integrating all the moving parts proved to be very difficult.  Our cloud server melted down because of overwritten dependency issue, the Chrome extension wasn't firing correctly on browse & last but not least we ran out of time!  Even with all this ruckus we were still able to band together & build a solid functional demo that clearly conveyed our concept & idea.

We proudly pitched our hack to the judges & shortly after I departed the event on a 2 hour drive home.  Upon arriving home I saw an msg from our teammate Sarah telling us that our hack won the Verisign sponsor prize for best use of their stuff!  It felt great but after reflecting on the win the biggest reward & gratification I got from the whole experience was actually collaborating with my teammates/peers. I was satisfied in working together to build out & demo the project no matter how fucked or incomplete we perceived it to be.

So to my teammates thank you for the experience & big ups to the TNWeb team for organizing a great weekend.  I had lots of fun competing in your event.  You should do it again next year!

I own a few older MacBook laptops and Apple's support for them are unfortunately being phased out which means that the newer MacOs releases don't function on the older hardware. Typical Apple move to force consumers to purchase their newer hardware. I normally don't buy Apple products but I had to a few years back for some IOS projects I was working on years ago so admittedly I'm not a big fan of the company in general. Though I'm not a fan of the company itself. I do like the quality of the older MacBook devices. They are tanks for sure. Very well built sturdy shells and most of the innards and components are on the higher end quality of the spectrum compared to their competing products. Since the MacBooks are well built and Apple doesn't support their old hardware they're great machines to re-purpose with a fresh install of Linux and in this post I'll describe i nstalling popOS Linux which is a very cool operating system produced by System76 . Upgrade

Shit! I accidentally commited large files to my repo

So I realized that a git repo I've been using at work had some older commits with unnecessary LARGE files.  The large files were things like executable binaries & application logs that weren't properly ignored in the .gitignore file.  Committing & leaving the unintentionally committed files in git repos can impact stability & performance if left unchecked. Image from Ilmari Kontulainen's blog Unintentionally committing unnecessary & large files is a very common mistake that most new & veteran git users make & don't realize until a few commits down the road.  I published some scripts & git commands that will help you list & remove unintentionally committed files from the git repos after the fact.  These scripts will be helpful for when you don't realize that you polluted or if you inherit an already polluted repo. Use this gist - python script to list files in the .git repo by setting a file size "grea

Let's face it folks Oauth2 is here & it ain't going anywhere! I've met many hackers that either really like the Oauth2 protocol or really hate it. Few & far between are middle of the road. I am one of those middle of the road ppl. I've been exposed to Oauth since version 1.0 and I've kinda grown up on it in the RESTful API world. It's becoming the most used weapon of choice for cloud based authorization but I would like to see some sort of standardization between the providers in regards to Refresh & Access token policies. Cloud service companies are widely adopting OAuth 2.0 & it's a great concept that provides a less riskier method for cloud services & app developers to provide a Single Sign-On experience for their users. OAuth enables developers to offer users an easy method to allow “trusted” apps to perform transactions in their cloud based services and applications on their behalf. For example OAuth enables a user to